The earliest Women’s Day observance, called “National Woman’s Day,” was held on February 28, 1909, in New York organized by the Socialist Party of America. The following year, at an International Socialist Women’s Conference in Copenhagen, inspired in part by the American socialists, German Socialist Luise Zietz proposed the establishment of an annual Women’s Day and delegates (100 women from 17 countries) agreed with the idea as a strategy to promote equal rights including suffrage for women. The day has been celebrated as International Women’s Day or International Working Women’s Day ever since.

After women gained suffrage in Soviet Russia in 1917, March 8 became a national holiday there. The day was then predominantly celebrated by the socialist movement and communist countries until it was adopted by the feminist movement in about 1967. The United Nations began celebrating the day in 1975. More about the history of IWD here

Commemoration of International Women’s Day today ranges from being a public holiday in some countries to being largely ignored elsewhere. In some places, it is a day of protest; in others, it is a day that celebrates womanhood. 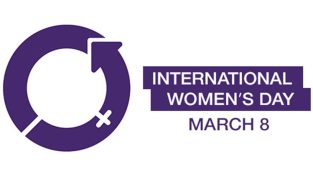 Great improvements have been made. We have female astronauts and prime ministers, school girls are welcomed into university, many women can work and have a family and have real choices. And so the tone and nature of IWD has, for the past few years, moved from being a reminder about the negatives to a celebration of the positives.

Although times have changed, sadly some of the key issues have not. Gender-based violence (GBV) or violence against women and girls (VAWG), is a global pandemic that affects 1 in 3 women in their lifetime 1. Only 24% of the world’s parliamentary seats are held by women 2 and men still make up nearly two thirds of the House of Commons 3.  The Equal Pay Act was passed in 1970, yet 50 years on the pay gap between women and men in the UK is 17.3% 4. Only 6% of FTSE 100 companies have a female CEO. In fact there are currently more men called Steve or Stephen running these top companies than there are women5.